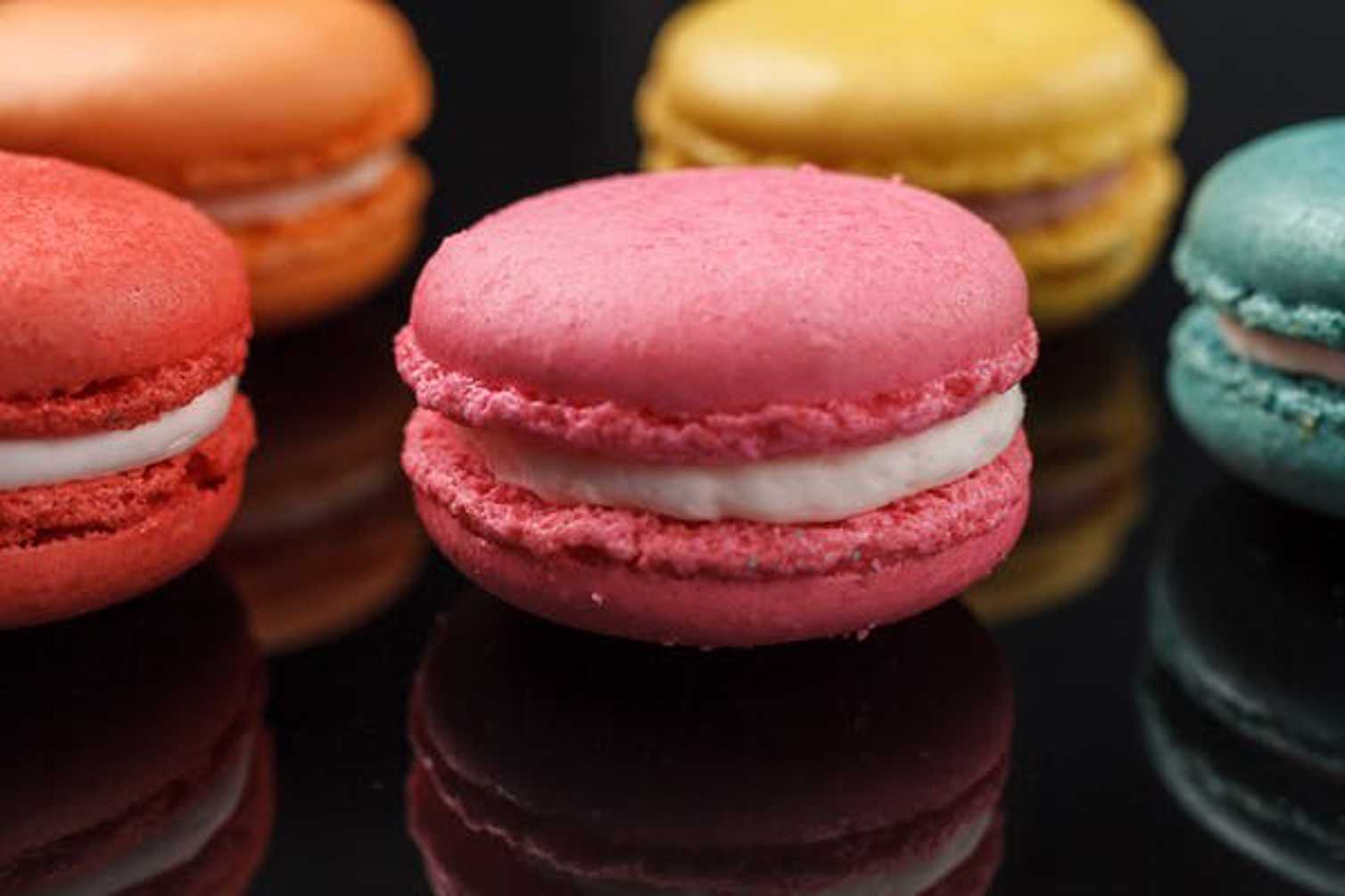 Here are some facts to help inform you of some kinds of treats you may encounter at pâtisseries (purveyors of fancy cakes and cream-filled treats) and boulangeries (bread specialists). Whether you are looking for something classical or a treat with a creative twist, you will more than likely find them at these businesses and you can certainly count on discovering something buttery, flaky and delicious waiting for you with us at our South Louisiana commercial French pastry kitchen.

A macaron is a simple meringue-like cookie made with ground nuts. It has been stated that a brilliant person at Ladurée in Paris had the idea to sandwich two macarons together with a rich cream or ganache, and a legendary dessert was born. The French look at macarons and cookies as a blank canvas to express creative freedoms and use the jewel-like confections in flavors as exotic as strawberry-balsamic, black sesame and we heard of someone using ketchup once as a filling.

Now, nothing can compare to a French mousse, whether we’re talking about fruit-based mousses or chocolate mousses, it is a top dessert! It can be quite the task to get the light and fluffy texture of the mousse.  In order to make the perfect chocolate mousse or the perfect fruit mousse, you’ll have to learn how to whisk all the ingredients together – egg whites, sugar, and egg yolks. Knowing how fast, for how long and how to know when to stop and when to whisk more is vital to creating mouth-watering mousses.

This pastry commonly known as a Napoleon, but the French call it a mille-feuille (pronounced "meel-fway"). The translation means "thousand leaves," referring to the thin and slightly crackled layers of pastry that are spread lightly with rich pastry cream and topped with (usually) marbled black-and-white icing. There are variations of the Napoleon which is in cake form and can be found in, the United Kingdom, Italy, Australia and Russia.

An éclair is a long, thin cylinder of a light dough pastry or what is called a choux pastry. It is then filled with pastry cream and topped with icing. In the Chambers Dictionary it says that the éclair is, “a cake, long in shape but short in duration.” They are not kidding because these tasty treats can be addicting.

The classic version is a combo of chocolate icing with vanilla cream filling, but creative bakers do tend to experiment with all kinds of flavors. We’ve done this ourselves and have tried combinations with amaretto, lemon, caramel and coffee.

Crème Brûlée is a simplistic dessert if you review the ingredients – vanilla custard and sugar toppings but, when you bite into a Crème Brûlée, simplicity is the last word that comes to mind. The caramelized sugar topping makes this custard cream dessert subsequently distinct. French confectioners had an inkling to blister the custard in order to fashion this amazing dessert a stand out by having to crack the sugar topping to get to the creamy custard inside.

The tart tatin is a baked apple tart with pastry-side up, and then flipped before served to allow the gooey butter and sugar drip onto the fruit. It has been said that its invention involves an accidental flip from a flustered baker who was not happy with their work but served the tart anyway which resulted in an instant favorite many still love today. Traditionally, the legit Tarte Tatin is made with caramelized apples, however, you can make this tart with pears as well. Now, while the story of how it came to be may not be true, but certainly the tart tatin can be called the original upside-down cake! The tart ended up becoming the signature dessert of the Hotel Tatin.

Opera cake is composed of thin layers of cake that are soaked in a coffee syrup and then layered with coffee buttercream and chocolate ganache. It is an elegant dessert that is assembled as a large square or rectangles and then sliced into many bar-shaped slices to serve to guests.

While this is an oddly named pastry (say "queen ahmahn") that is quite a treat and that is delectable if you are a fan of butter. In the unique Celtic-sounding dialect of Brittany, its name translates as "butter cake." Kouigan Amann pastries hail from the Brittany (or Breton) region of France and is a pastry is made with a croissant-like dough that's folded and refolded into rounds. Kouigan Amann must be baked slowly, at a low temperature, so the dough puffs to form many layers, and caramelizes the sugar on top into a crispy crust that crackles delightfully between your teeth.

You can think of these desserts as a fancy cream puff that is made up of two tiers of choux pastry — graduated in size, filled with pastry cream and is doused by icing which holds it all together. The combination of chocolate icing and vanilla cream piping looks a bit like a nun's habit, which is why it is called a religieuse.

This dessert was inspired by a bicycle race between two cities in France. Basically, it’s a ring of choux pastry that has been split in the middle spread with rich cream that resembles a bicycle wheel. This would be a fun dessert to serve after a bicycle race and rally in South Louisiana!

St. Honoré, or Gâteau St. Honoré , begins with a circular of puff pastry, on top of which is piped a ring of pâte à choux (choux pastry dough). The middle well is filled with crème chiboust, then topped with a series of small cream puffs dipped in caramelized sugar. It is then finished with piped whipped cream to in an elaborate fashion to make it very fancy. It was developed to honor of the French patron saint of bakers and pastry chefs, Saint Honoré, and is an over-the-top dessert that make a statement.

Did you know that the concept of a croissant was actually born in Austria, under the name "kipferl?” These days the croissant is synonymous with the French cuisine but the recipe was adapted and adopted by the French, where it came into its own as a premier staple of dining tables. Croissants incorporate an insane amount of butter into a dough while folding and refolding it, which gives them a heavenly, airy texture and buttery, rich flavor. The exterior crackles when you bite into it, giving way to a soft interior that is delightful to taste.

Choux pastry is a wonderful pastry used in many French desserts. It is made with basic ingredients – flour, water, eggs, and, of course, butter. This is not the typical flaky French pastry, this pastry is more puffy than flaky and it is used for cream desserts such as choux à la crème, eclairs, and profiteroles.

As a bonus here are some very significant moments in the history of French pastry & confections: